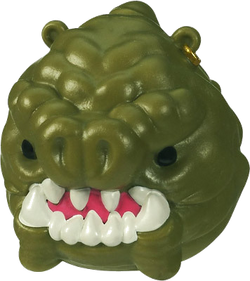 Rancor Pig is a large, frightening pig who tried to eat Luke but was defeated by the same bird. He is owned by Jabba and his name is actually Pateesa.

He doesn't appear in any level or cutscene in the game, but the first cutscene of Moon Of Endor references this beast. There is also a toy of him, which is the only time it's possible to see his appearance.

He is an enormous pig with brownish-dark green skin, a set of sharp teeth with two large jaws, a giant pink tongue, black eyes, small ears with the right one with a golden ring and 3 big spines appear in the back.