It is known that Rebel Pilots are the Blue Birds. In the official gameplay trailer, it was revealed that the Rebel Pilots have the power to split into 3, just like in the previous games, but now they can split even after being hit. Although this does not do much damage, this can be useful after being hit with a laser. After their power is upgraded, they can cause small explosions around them when they hit. This bird is the only bird that didn't return to the sequel due to being replaced by the Jedi Youngling.

According to the Angry Birds Star Wars Character Encyclopedia, their official name or term is Blue Squadron or Pilot Birds. They fly in the formation of one, then split into three to confuse the enemy. They are reliable and brave and dedicated to fighting the Sith. It takes years to become a member of the Blue Squadron, and you have to be "Blue". Their helmets are worn with pride and make other birds envious of them. The orange line on their helmets help them see each other.

As seen in a comic, driving an X-Wing 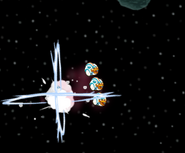 Add a photo to this gallery
Retrieved from "https://angrybirds.fandom.com/wiki/Rebel_Pilot_Birds?oldid=294504"
Community content is available under CC-BY-SA unless otherwise noted.