Red's Mighty Feathers is the ninth Angry Birds episode. It was originally a non-sequential episode consisting of a new style of gameplay known as "Egg Defender", but negative feedback from fans caused the V3.3.0 update to revise it as the ninth episode, with 15 standard levels that follow standard Angry Birds gameplay. It compromises the 24th theme, acting as a direct followup to the previous episode, and also made Egg Defender Theme 25.

The updated changed the original theme into the Angry Birds Trilogy theme, though it was changed back after.

Unlike the other episodes in the game, rather than Flash animation cut-scenes, this episode uses a comic book/strip-style format with still image panels telling the narrative, similar to the cutscenes in Angry Birds Rio and Angry Birds Friends.

Each player is given unlimited Red's and set with one egg in this episode. The player tries protecting the egg while the pigs try to steal the egg.

Now, Red has a new power that acts like Lazer Bird (Space Chuck).

You have unlimited birds, but you can only attack with Red (and his new power).

You can see the video below.

Teaser Photo with a plush Red and an iPad 3 with a blurred level and a sticky tab saying “Coming Soon!” 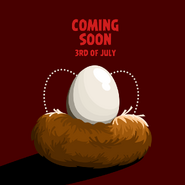 Beta screenshot of 23–11. Note the old piggy design being used.

New logo of Angry Birds while launching this level.