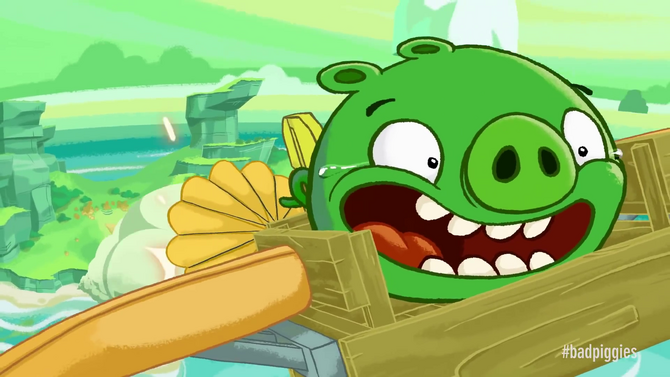 Ross (also known as Freckled Pig) is a supporting antagonist of the Angry Birds series. He is a pig who builds vehicles.

He was commonly referred to as "Freckles" by fans until Rovio Entertainment Corporation revealed his name to be Ross. Ross has also been through various disguises, from a gentleman to an alien, and been in several vehicles.

Ross is a Minion Pig, but with freckles, who sports talent for creating and piloting vehicles. His freckles are arranged in a triangle, often asymmetrically.

In the Bad Piggies Cinematic Trailer, he is the same as the Minion Pigs' Toons appearance, but with freckles.

In The Angry Birds Movie, he is the same as the Minion Pigs' movie appearance, sometimes even lacking freckles.

Ross is Leonard's right-hand pig. He's not the smartest pig of the bunch, but will always try to do things right. He approaches his job with great enthusiasm. Whether serving as a piggy diplomat greeting the birds with warm hugs or attempting to operate contraptions like zip lines and escalators, Ross is usually doing it with a silly smile on his face and a perky curl on his tail. On the other hand, Ross is shown to be trusty and fun-loving when doing a dance-off or doing whatever others like.