Ross (also known as Freckled Pig) is a character in Bad Piggies. He is a basic pig the player controls in the game Bad Piggies and the secondary antagonist in The Angry Birds Movie while Leonard is the main one. He usually reacts to how you control the vehicle. Also he will be frightened or enthusiastic. Ross can propel gray wheels, fans, propellers, spring-loaded boxing-gloves and suction-cup wheels. When the player is stuck, Mechanic Pig fixes the vehicle that Ross rides. Ross appears in Angry Birds, in the Bad Piggies cut-scenes.

Ross additionally appears on Angry Birds Epic as Prince Porky where Wiz Pig (Chef Pig) & himself tries to steal the eggs for King Pig with a troops of Minion Pigs. He was commonly referred to as ''Freckles'' by fans, until Rovio revealed his name to be Ross. Ross has also been through various disguises, from a gentleman to a clown, and been in several vehicles.

A pig similar to him appears in Angry Birds MakerSpace.

He is a Minion Pig, but with freckles, whom sports a talent for creating and piloting vehicles.

Ross is Leonard’s right hand pig. He’s not the smartest pig of the bunch, but will always try to do things right. He approaches his job with great enthusiasm. Whether serving as a piggy diplomat greeting the birds with warm hugs or attempting to operate contraptions like zip lines and escalators, Ross is usually doing it with a silly smile on his face and a perky curl on his tail. On the other hand, Ross is sown to be trusty and fun-loving when doing a dance-off or doing whatever others like.

Ross was born on Piggy Island, most likely in Pig City.

During an unknown point in his life, Ross met the future king of Piggy Island - Leonard Mudbeard. He later began assisting him and accompanying him during the Bird Island Expedition. He disembarked from The Porkchop Express along with Leonard, failing with the elevator. Once he stopped the elevator, he was ordered to give hugs to the Birds including Helene, Officer Bill Beakins, and Stella to show how the Pigs show friendship but oddly refusing the Hug Trader after failing to hug Terence. At Stella's Flock's performance, he along with Leonard offered the Birds special gifts including, the Trampoline with 2 more pigs on and the slingshot. Along with several fruits, He and the other pigs slingshoted Red for demonstration. He accompanied Earl, Leonard, and a few other Pigs in a tour of Bird Island led by Stella and laughed at Red's supsiciousness. He along with Leonard and the other Pigs steal the Birds' Eggs, and sailed to Piggy Island. Ross tragically became one of the earliest casualties of the Battle of Pig City,while he was nonchalantly serenading other Pigs who were excited by the day they would feast on the Eggs they captured. When the Birds attack their city and  Chuck, Bomb and Mighty Eagle save the Eggs that were about to be boiled, Ross along with Leonard and the other Pigs corner Red protecting the Blue Egg from the Pigs. As the cauldron falls spilling hot water across the water, Ross and the other pigs, excluding Red and Leonard flee to safety. Along with several other pigs, he was defeated in the Battle of Pig City after being blown up by an huge dynamite explosion, but survived as well an then danced with Leonard, after planning to steal the Eggs again from the BIrds.

Involvement in the Great Egg War

He was just a normal pig that carried King Pig's litter, until the king found a telescope and the pigs found the eggs, then ordered Mechanic Pig to make a map of it, which Ross accidentaly destroyed the map and was ordered to make vehicles in order to obtain all parts of the map.

He then was involved in other multiples messes on  trying to get the eggs, such as discovering that there are no eggs and it was a painting on the telescope, destroyed a cake, a TNT map and finding out that the eggs were made out of stone. BUT, on a normal day, King Pig's statue disappeared which Ross went to El Porkado and took a statue, succefully finishing the task and making King Pig happy and proud of him. He also survived the birds' attack when they found out that he was stealing the eggs. 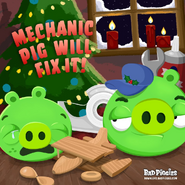 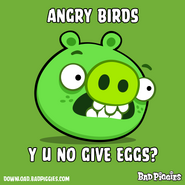 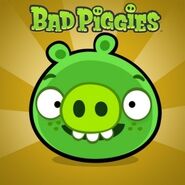 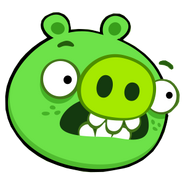 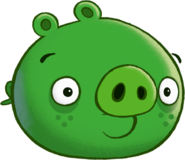 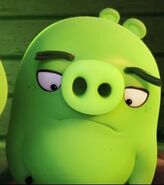 Ross in The Angry Birds Movie 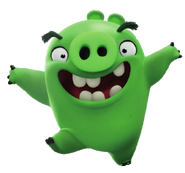 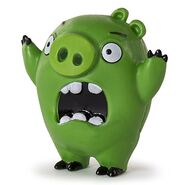 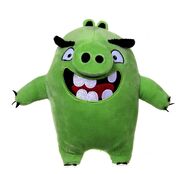 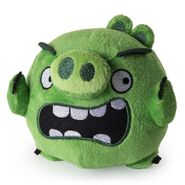 A 5-inch ball plush of Ross 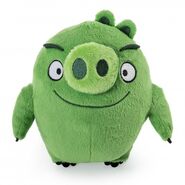 Another Plush of Ross

In The Angry Birds Movie
Add a photo to this gallery

Retrieved from "https://angrybirds.fandom.com/wiki/Ross?oldid=231597"
Community content is available under CC-BY-SA unless otherwise noted.