The name is a portmanteau of Chuck, the main character of the episode, and Run, Forrest, run!, a famous quote by Jenny Curran from the movie Forrest Gump.

The birds are fed up with speedster Chuck winning every race, so they unleash their secret weapon - Terence!

The episode begins with Chuck, Bomb, Terence and Jay, Jake, and Jim warming up for a race. Chuck examines other competitors preparing and was confident that he would win, knowing that he could outspeed all of them. Terence looks at Chuck angrily, scaring Chuck and causing him to push the Blues and Bomb to the right. Then, Matilda fires her pink pistol to start the race. Everyone runs, except for Terence, much to the confusion of Matilda and Red.

Convinced that he would win, Chuck boastfully races backward, taunting Bomb and The Blues. In a forest, near the entrance, Chuck saw the other competitors far away. Feeling cocky, he resumes running, just to crash into Terrence, who somehow appeared in the forest. He decides after a quick check to carry on, just to meet Terrence again shortly after. Convinced Terrence was after him, he runs through the course into a desert.

After resting for a while, Chuck checks to make sure Terrence was not behind, but when he turns around for the third time, he sees Terence right in his face. Shocked, he runs, just to crash into a cactus and yelling in pain as he ran into a cave, shaking off the thorns in the process.

Inside the cave, Chuck could not see anything, so he lit a match, just to see Terrence again. Realizing he was somehow always been nearby, he runs past him into a river where he sank into the bottom, just to meet Terrence yet again. Shocked again, he speeds past a King Pig mermaid statue, just for it to be beheaded.

Once he reaches the riverbank, Chuck gets out and races to the finishing line. Knowing he was about to win, he jumpes into the air to perfoming a majestic finish, just to bump off Terrence. Confused as to how that could even happen, Chuck unintentionally gets stampled upon by Bomb and the Blues who cheer for Terrence. Injured, Chuck pulls himself to the finishing line.

Later on, in the award ceremony, Chuck is given the bronze medal, Terrence gets the gold medal, and both Bomb and the Blues gets the silver medal. Chuck, who is jealous at Terrence for winning by cheating, moves far away from him, just for Terrence to crash down the podium stand onto Chuck, sending him flying. Knowing that he would not be back so soon, Terrence smiles.

Chuck twerking at The Blues. 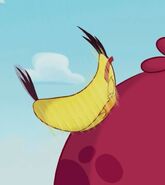