Samantha (also known as Sam-Sam) is a Hatchling, resident on Bird Island and a recurring character in the Angry Birds Series.

Samantha has Brown eyes, white-yellow-ish feathers, and small hands, small orange beak and feet and a tail with red feathers. One of Samantha's unusual feature's, is the lack of eyelashes, which most other female birds have in the series.

She seems to be quite clumsy and curious, as seen on some ocurrences and mainly on The Hatchonaut, her friends are The Blues, Zoe, Will, Vincent and Ariana. She is also loveable, loving animals (Such as worms and caterpillars) and Jay, her love interest. She is also clueless, being fooled oftenly, her cuteness is also a characteristic of her. She is shown to love blowing raspberries. 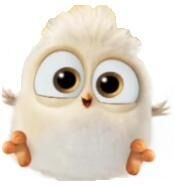