The Sandbox is a vehicle creator in Bad Piggies, where the player can build with every object in the game. To unlock most of the levels, the player must clear ⅓ or ⅔ of an episode's default levels. One episode is unlocked by collecting ten hidden skulls throughout the game. It has 9 levels (11 if Field of Dreams and Little Pig Adventures are counted).

Each level has an objective where Ross must collect twenty starboxes, except for Field of Dreams and Little Pig Adventures, in which Ross must collect the double of boxes (40). However, the main purpose of the Sandbox levels is for the player to control their creation to their heart's content, thus the star boxes won't reappear after they are collected.

The player is given an assortment of parts that varies in each sandbox level. Extra parts can be earned by completing stars in the regular levels. The construction grid is also much larger than those in regular levels.

The Red V8 engine is also unlocked by completing the episode. 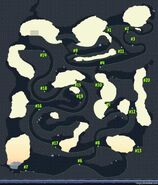