The Scarecrow Pigs appear only in the Haunted Hogs episode from Angry Birds Seasons. Most of the Bad Piggies except King Pig, have scarecrow variants in this episode. They are the only Pig variants, aside from Zombie Pigs, to not appear in their typical green color. 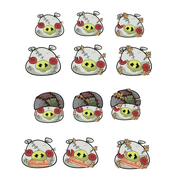 Retrieved from "https://angrybirds.fandom.com/wiki/Scarecrow_Pigs?oldid=269069"
Community content is available under CC-BY-SA unless otherwise noted.