Scrooge is an Angry Birds Evolution bird that can be obtained at events, such as Christmas 2018, his debuting event.

Back in the days, Scrooge was bullied by little Don Bacon to put on reindeer antlers every winter and pull his sled to school. Growing into a fierce creature, half reindeer, half flocker, Scrooge finally striked back. It is said Don Bacon still wears an antler shaped scar on his buttocks and Scrooge still hates Christmas.

Based on from Grinch, he is a small bottle-shaped yellow bird with small wings, he has a long upside down triangle-shaped orange sharp beak with a smile showing perfect teeth that reaches the eyes, ripples on the forehead, a black tail with various feathers, two large feline-like eyes with yellow irises with pupils, almost closed eyes, two long brown feathers and two small ones as hair, long black bushy eyebrows,  and small feet of the same color as the beak.

He has now a fake white beard without moustache, his smile is smaller and he wears a green Christmas hat with a fluffy white ball and fluffy corner.

Based on Oogie Boogie from The Nightmare Before Christmas, his eyes are now black and the irises are glowing and his beak has now threads. He wears a beige fabric suit that fits the entire body which the head to body is patched with threads and the forehead is also patched and leads to an empty part behind the head, there's also a square brown patch on the bottom of the torso.

Based on Rudolph The Red Nosed reindeer, his yellow feathers are now bigger and pulling up, making more hair, his teeth become fangs and there are now two reindeer white antlers on top of the head. He wears green fabric shorts, a red nose that is perforated by the beak is tip and a white collar with sharp tips that often have golden bells.

Accompained by a trail of stars Srooge dashes over the battlefield, dealing 80 damage and confusing pigs at a high chance. Confused pigs might attack themselves, other pigs or the birds.

Accompained by a trail of stars Srooge dashes over the battlefield, dealing 250 damage and confusing pigs at a high chance. Confused pigs might attack themselves, other pigs or the birds.

Scrooge calls for a swarm of bugs, dashes with them over the battlefield, dealing 975 damage, Each time Scrooge uses "be haunted!", his skill gets stronger by 10%

Spoling It For Good Rank 1

​​​Accompained by a trail of stars Srooge dashes over the battlefield, dealing 1170 damage and confusing pigs at a high chance. Confused pigs might attack themselves, other pigs or the birds.

Each time, pigs deal damage to your health bar, they injure themselves by 10% of the damage

Damage against obstacles increased by 40%.

As his rarity is good, he is very strong. Evolving him with the right evolution and (Or) then awakened will make him stronger. Totems and Runes can also help. 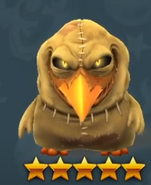 Spoling It For Good Evolution. 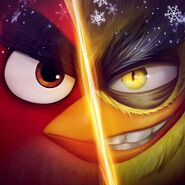 On the game icon
Add a photo to this gallery

Retrieved from "https://angrybirds.fandom.com/wiki/Scrooge?oldid=257508"
Community content is available under CC-BY-SA unless otherwise noted.