Male
Sea Monster Pig is a pig that appears in the Angry Birds Friends Pirate Tournament.

This huge pig greatly resembles a sea monster and Fat Pig. It has eight short tentacles, four teeth, and an evil grin. Its body is covered by large warts, which are visible above the eyes and snout. Its appearance is very similar to the Fat Pig's, which has appeared in many other Friends tournaments.

This pig may be a parody of the Kraken (as seen by the poster which shows the pig attacking from underwater). 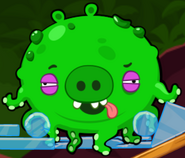 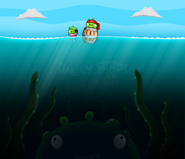