Season 2010 is the first package of Angry Birds Seasons. It contains the following two episodes:

Season's Greedings is succeeded by Hogs and Kisses, the first episode of Season 2011.

For a few of the episodes, in the old version, the picture on the season selection package screen changed:

Like all the seasons, the Season 2010 is shown on a  banner button. 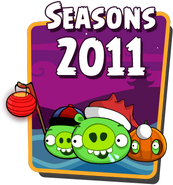