Season 2012 is the third package of Angry Birds Seasons. It currently consists of the following six episodes and 135 levels.

Year of the Dragon is preceded by Wreck the Halls, the seventh and final episode of Season 2011. Winter Wonderham is now succeeded by Abra-Ca-Bacon in Season 2013.

For each of the first three updates, the picture on the season package selection screen changed for Season 2012. But in the current update, the picture has been completely deleted, the only thing that remains is the Season 2012 banned. 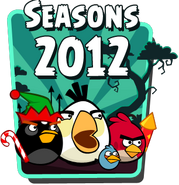