Shipwreck Reef is the thirty-fifth level of Southern Sea in Angry Birds Epic. It is a Normal stage. When this level is finished, the player may spin for 3 Corals.

Pirates use Dirty Tricks and are immune to any negative effects.

Hints: Simple attacks are the most effective to overcome these mean fellas. They are vulnerable to support abilities like damage reflection.

The player has to engage 1 Pirate, 2 Mateys and 1 Big Boss. Each enemy's stats are shown below.

Choose Matilda in Druid, Red in Samurai and Bomb in Pirate. Use Bomb's secondary skill when it has been expired, then attack every turn with them (Pirate first, then Two Maties). When Big Boss is almost ready to attack, use Red and Matilda's secondary skills on the bird with the lowest health. Give the Rage Chili to Red when it is full. Repeat this over until you win or lose.

Just defeat Big Boss first, then the Pirate and the Matey. 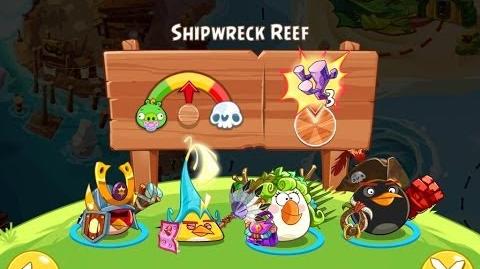