Female
Shirley is a bird that only appears in The Angry Birds Movie and Angry Birds Evolution. She is shown to be the oldest of all birds.

Shirley is a blue, moderately-sized bird distinguished by not only her age but also her massive crest, which is the largest among known birds. She has short, feathered legs and a moderate wingspan, and is seen using a wooden walker to move around. The walker also has a basket for holding things, which may imply that Shirley's wings are no longer capable of carrying anything.

In Angry Birds Evolution, Shirley is seen without the walker and has a more bluish plumage.

She starts to wear a denture, a pearl necklace, glasses and a string on her hair.

Shirley is kind-hearted and enjoys being able to walk when others allow her to do so, despite not being able to move quickly. While Shirley was attempting to cross the street one time, Monica, the crossing guard, gave her as much time as she needed to reach the other side. It has also been stated that she also feels more comfortable walking with Officer Bill Beakins, who is happy to assist her in crossing the street, according to the Angry Birds Movie official guidebook.

When Grandpa's away. Grandma Shirley comes out to play NASTY!

Attack with two additional mirror images for 94 damage, increases your combo by 3 for each kill instead of 1.

Attack with two additional mirror images for 123 damage, increases your combo by 3 for each kill instead of 1. 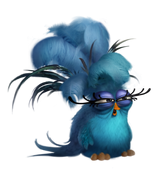