This article is about the episode. For the cinematic trailer, see Short Fuse Trailer.

Short Fuse is the tenth episode of Angry Birds and adds the 26th, 27th, and 28th themes. In this chapter, Bomb gains a new power called "Shockwave" and is able to zap pigs and push other blocks and objects.

In this episode, the pigs have stolen the eggs again and have escaped to a laboratory. Nearby, Bomb is standing in a puddle of a purple potion and gains the new shockwave power.

In the first level, the player is given Bomb with electrical shock wave powers. When activated, Bomb electrocutes all pigs in his blast radius, and strongly repulses outer objects. After the first few levels, Shockwave is unlocked as a Power-Up, which then can be used in other levels.

There's also a purple potion that does not appear in any level, only in the first cutscenes. It gave Bomb his shockwave powers. 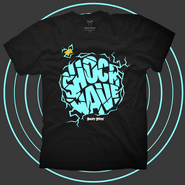 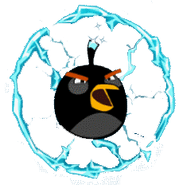 A spill of the Purple Potion.

The Potion you get after completing the episode

The Potion you get after 3-staring the episode