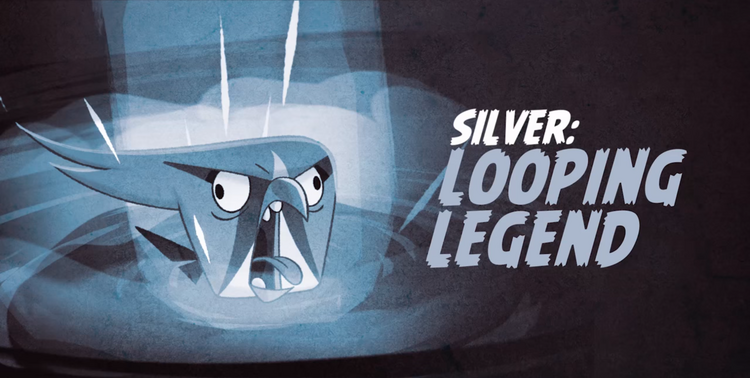 "Guys. This is Silver, the greatest kid sister in the world."
"Well, I'm not exactly a kid anymore, Chuck."
"Oh... You'll always be my kid sister!"
— Silver and Chuck, The Angry Birds Movie 2

Silver is a bird that appears in the Angry Birds series. Her role in the franchise can alter based on a specific project, like she could be raised by the Pigs or she is Chuck's sister.

During production of The Angry Birds Movie 2, the film artists were given the original look of Silver and decided to make drastic, significant changes to her design so that she would look almost completely different because they were aiming for a "cuter" look. She was originally going to be a vulnerable character with a more limited role, but was changed into a very important one in the final cut.[1]

After the design for Silver was finalized, character artist Francesca Natale once thought up of the idea of having her being able to fly by spinning her crest and tail like helicopter blades, which was ultimately scrapped.[2]

In her original design, Silver is a Peale's falcon who is mostly covered in gray feathers. Her eyes have black pupils, and her beak has a red-colored end pointing downwards. Her head has long feathers pointing behind her body. She has two teeth in her mouth, with round ends.

In The Angry Birds Movie 2, Silver has a completely different design. She now sports a lighter plumage and aqua green pupils. On both sides of her head, there are two large horsetails. She is also very tall, with thin, yellow, scaly legs. In Angry Birds Journey and Angry Birds Reloaded, this design was altered to take out Silver's limbs, although the former's design would look more like a hybrid of the classic and movie designs.

In Angry Birds Bubble Trouble, Silver's design was switched back to her design from Angry Birds 2, though she now has limbs.

In the games, Weirdly, Silver was raised by pigs and doesn't even care about the eggs! But even though she's still got some pig-like ways, she's happier with the flock and is a great flyer who is very funny. Silver was initially a stolen egg by the pigs, who were just about to cook the egg until it had cracked open. Thus, Silver was born, and the pigs took her in as their own. Because of this, Silver notably has multiple physical and mental traits of the pigs, having a very goofy sense of humor and even having the same exact teeth as the pigs.

However, after the release of The Angry Birds Movie 2, Silver's origin and personality was completely changed. Now she is portrayed as Chuck's sister as well as being Red's love interest. It also introduced the idea that Silver was very intelligent, something that would carry over within appearances like Bubble Trouble or Reloaded.