The slingshot is the main weapon/item/utility the birds use in order to attack the pigs. The player can pull back on the slingshot strap, then release to fire a bird in whatever direction the player desires. The slingshot first appeared in Angry Birds, and every game after that, except in Angry Birds Transformers and a few other games, even in its spin-off, Bad Piggies.

In The Angry Birds Movie, the slingshot was first introduced during a dance party. Later, during the Raid on the Eggs, Red was flung towards the beach. Later, in the Battle of Pig City, birds were flung to Pig City, destroying structures and the castle. Terence accidentally broke it for being too big to go on it, but it was later repaired. The newborn Blues then used it to launch themselves at sea.[1]

In the years after the battle, as Bird Village expanded, the Birds used slingshots to catapult themselves to other parts of the village, effectively creating a mass transit system out of them.[2]

The player can change the direction and angle the bird will launch at by simply moving the bird up or down. The player can also change the firing speed. Pull the bird back, slightly to make a weak launch, and pull it back farther to make a stronger launch (the latter often recommended).

In Angry Birds Rio, if the player is already using the slingshot, he/she can't cancel the process.

The slingshot is used to begin races in Angry Birds Go!. The King Sling also appears as a Power-Up in the game, which increases the distance when the player is released from the slingshot and begins the race.

The slingshot is used in Angry Birds POP! to fling bubbles to pop bubbles. 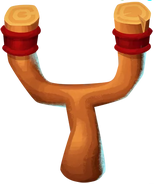 It is possible to cancel a shot even after the bird is readied, but pulled back. This can be done by moving it back towards its starting point, in the event that a different bird is desired at that time. The slingshot can be leveled up, and it will change style, see Angry Birds 2/Score Multiplier Rank for more information. 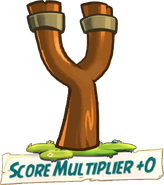 In Angry Birds Dream Blast, the slingshot is a power-up and can break a bubble which you can pick by throwing something at it, if the thrown thing fails to break it then the slingshot will have to break it itself.

"Hey Alex, how's the commute treating you?"
— Ella talking to Alex while both are in mid-air in transit, The Angry Birds Movie 2

The slingshot transit system is a new method of transportation invented in Bird Village that allows Birds to instantly travel to other parts of Bird Island using slingshots without having to walk all the way.

Anyone who wishes to quickly travel to a certain area of Bird Island via the slingshot transit system would enter any nearby designated transit slingshot, pull themselves back on its elastic band and aim in a particular direction towards the desired destination, before releasing its tension to catapult themselves there. Each slingshot route contains midway stops that can be accessed by grabbing a perch nearby the desired one, swinging around it to halt all forward motion and allow for an easy dropdown from it. If the desired destination is at the end of a slingshot route, which may take a few hours to reach after launch, there will be a target pad held by shock-absorbing springs to help riders land there safely.

If the threat of Pigs are reported nearby, any transit slingshots close to the adversary may be temporarily put out of service and repurposed as combat turrets, such as the one used to quickly exit Bird Island Beach during the Battle of Overseas Pranks.

The slingshot transit system was invented at some time during the Great Egg War as the village expanded and modernized, and by the time that war came to an end, the system saw widespread use. A network of multiple, unique slingshot routes were created to service various destinations in the village and the island.

"Even with the stuff on Bird Island that was reused from the first film, which was quite a bit, we wanted it to feel like time had passed and there was an update to their world. For example, on Bird Island, now they’re using slingshots as their main method of transportation. That wasn't part of the first film. They had a slingshot, but now it's part of their everyday use, almost like a subway station. They stand in line and then take the Blue Line, the Yellow Line, the Green Line or whatever. We updated what we had on the first film to bring the audience a new experience."
— Pete Oswald, production designer of The Angry Birds Movie 2 In an article for Animation World Network, production designer Pete Oswald revealed that the slingshot transit system was put in place to give audiences a good sense of how much the village and Birdlife had changed since the amount of time that had passed from the events of the first film. He specifically wanted to treat the transit system as if it were truly the Bird equivalent of subway systems and/or transit bus routes that humans use daily in cities today.[3]

"Just look where the last bird went and adjust from there."
— Red, The Angry Birds Movie

During a typical level in either of the two major titles in the Angry Birds series and the 2014 Angry Birds Stella spin-off game, players may need to rely on a traceline that reflects the trajectory of the last Bird launched to make accurate shots.

After the player fires their first Bird with the slingshot, the game then retains their trajectory, marked out as a trail of white dots, which resemble smoke a bit.

The Traceline is indirectly alluded to in The Angry Birds Movie, specifically by Red as he coordinated the opening salvo of the Battle of Pig City. He uses the Traceline in an attempt to guide Stella towards the vicinity of where Bubbles was launched into Pig City, hoping to inflict more damage.