Small Pigs are pigs featured in the first four Angry Birds Games and are the smallest of the entire Pig. This pig is the first pig encountered in the entire game, starting at Theme 1-1. He is also the weakest species of pig in the games he appears in and is defeated by a simple falling bird or block. He is weaker than all the other pigs in the game and is very common after his first appearance.

Small Pig, which resembles The Blues' design only for the King Pig level.

Small Pig as he appears in Angry Birds: Ultrabook Adventure. 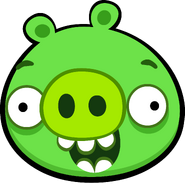 Small Pig as seen in the Comic-Con level of Pig Days
Español Eesti Português do Brasil Українська
Community content is available under CC-BY-SA unless otherwise noted.