Smuggler's Den is the first episode in Angry Birds Rio, consisting of 30 levels (1-1 to 1-15 and 2-1 to 2-15). All levels take place in the lair of the bird smugglers from the movie (Marcel, the leader, Tipa, the heavy smuggler and Armando, the tall smuggler).

During the level, the Angry Birds must free the caged birds that the Smugglers have captured. In level 2-15, Rio movie characters Blu and Jewel are in a large cage and can be freed for 5000 points.

To complete levels, a player must free all the birds trapped in cages, similar to hitting pigs in Angry Birds and Angry Birds Seasons. Once a bird hits the cage, the trapped birds fly away.

Level 1-1 starts with the opening scene of the game, presented as comic-style panels. It starts with a single panel of the Red Bird, Blue Bird, and Yellow Bird watching over the eggs. The original panel replaces the photo with a cage falling down on the birds, and a helicopter takes it to a warehouse in Rio. The Birds see other rare species trapped in cages and become angry. The last panel shows the Birds smashing out the cage.

The end cutscene shows Blu and Jewel chained, and then it shows the Birds planning to escape to the jungle, which they do so. Back at the den, Nigel hears this and angrily commands the marmosets to attack the Birds. 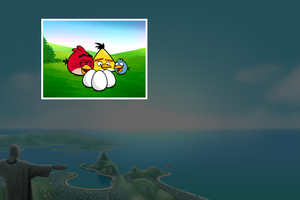 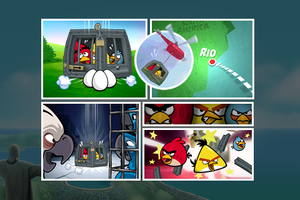 Fifteen hidden Golden Pineapples can be found throughout the episode. Collecting all 15 will earn a player a pineapple trophy as well as the Pineapple Purist achievement, worth 15 points on Apple's Game Center.

Pineapples can be found in the following levels:

On December 18, 2012, Angry Birds Rio has been updated for bonus levels. 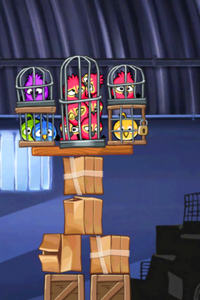 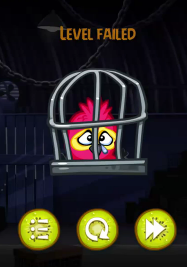 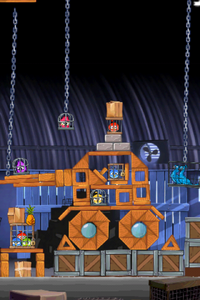 Add a photo to this gallery
Retrieved from "https://angrybirds.fandom.com/wiki/Smugglers%27_Den?oldid=262668"
Community content is available under CC-BY-SA unless otherwise noted.