Template:Infobox character 2Soccer Boy Bird is a minor character that appeared in The Angry Birds Movie, Angry Birds Action! and in a poster in Angry Birds POP!. He appeared in a brief scene where he played soccer in front of Red's house, with his soccer ball bouncing on its side, and as a result of Red's temper, got kicked into the ocean, but he swan back to safety and now lives in Bird Island.

He appeared in the game Angry Birds Action! as a non-playable character in the Bird Island map on the island select screen.

Soccer Boy Bird is a small, young blue bird with a spherical body. He has short limbs and a blue plumage with a paler band around his waist. His limbs are bigger than the Hatchlings, meaning that he is older than one and is a slightly more grown child. He has two little orange feet with three toes. He has a small yellow beak, two yellowish eyes with large black pupils, and a small black-feathered tail. His father is green and his mother is red, different from himself.

Soccer Boy Bird likes to play with a soccer ball, giving no thought to whom he might annoy. He could be seen as lonely and wanting a friend to play with him but was oblivious to the anger of Red, who appeared to be interested in playing with him after the boy's ball-kicking rudely awakened him, before kicking him into the water nearby. He also has a lot of friends, as seen on the movie.

In The Angry Birds Movie

Soccer Boy Bird first appeared in The Angry Birds Movie, Red was sleeping but his house was shaking and making a loud noise, waking him up. A flower pot falls on his head and hurts him, he leaves his house and sees the Soccer Boy Bird playing soccer. Red goes to hum and looks at him like if he was going to play with Soccer Boy Bird but he kicks him to the sea.

He then went to Red's judgment with a different appearance and lives happily on Bird Village.

Red kicking Soccer Boy Bird, from The Angry Birds Movie
Add a photo to this gallery

Soccer Boy Bird makes another appearance in the mobile game Angry Birds Action!, a tie-in game for The Angry Birds Movie, as a non-playable character who can be seen in one of its loading screens.

Soccer Boy bird appears in poster for The Angry Birds Movie that could be unlocked in the game where Red slips on the sand when trying to kick him away, protecting himself with his hands. 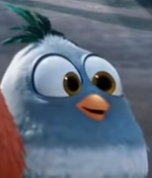 Retrieved from "https://angrybirds.fandom.com/wiki/Soccer_Boy_Bird?oldid=256493"
Community content is available under CC-BY-SA unless otherwise noted.