Template:Epic Infobox Level Sonic Dash is the second level of One-Time Event in Angry Birds Epic. It is a Campaign stage. When this level is finished, the player may spin for 1 Item for Chuck's Illusionist Class. (250, 500, or 750 Event Medals depending on the difficulty selected when item of stage was maxed out if replaying) A lot of new entities were made for this event.

One, Sonic was unlocked and made the player's third bird. His two skills were a preview for Chuck Illusionist.

Hint: Deal with the tallest pigs first. They pose the most threat.

There were total of 20 levels in this event. Each level setted up with a different difficulty.

If you want to get Chuck's Illusionist Class for free, you have to collect 5

This is a list of enemies you can encounter. Unlike other levels, it is unknown which enemy will be in the battle because the enemy will be set randomly.

Part 1 of the Sonic Dash map.

Part 2 of the Sonic Dash map.

Part 3 of the Sonic Dash map.

A full map of Sonic Dash. 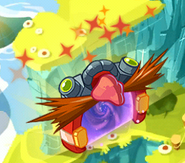 A star gate.
Add a photo to this gallery

Retrieved from "https://angrybirds.fandom.com/wiki/Sonic_Dash?oldid=213170"
Community content is available under CC-BY-SA unless otherwise noted.