Post-Matilda (no numbers due to variance in level encounter)

Note: This cutscene occurs after clearing this stage.

Red was within reach of Chuck. Prince Porky immediately realized that he needed to stop Red from freeing him, resulting in him ordering the two Rogues to go and lock Chuck up in Pig Prison.

Note: The Wealthy Rogue rarely appears, but does not always appear.

Note: Since the combination can vary, only one of each type of enemy's stats will be listed here.

here are the combinations:

Same strategy as the one above. However, a Stick Pig has been added. Take down the Stick Pig first, then attack the Brute. When he is about to attack Red (the effect of Red's Attack is to force target to attack him for 3 turns), use his Protect and Chuck's Shock Shield to protect Red. You will be able to defeat the Brute before he can attack again.

. If there is a Brute in the wave, remove all weaker enemies on the field first. Then use Red's secondary skill (Protect) to protect the targeted bird when Brute is about to attack. If there is no brute on the field, attack all the pigs every turn.

Brutes and Stick Pigs are Common Pigs so they should not be too much of a problem. However, Brutes deal 105 damage, so use Red's support ability to block 55% (57.75) of it, making the damage 47.25. Wealthy Rogues appear rarely, so defeat them to get 50 Snoutlings. Don't forget that Level 3 Stick Pigs can appear as well. 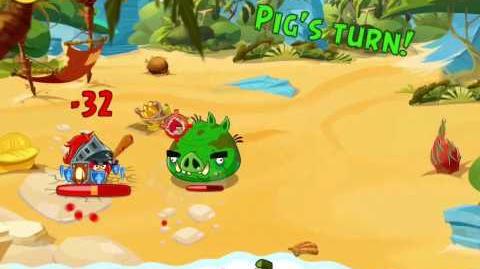 Retrieved from "https://angrybirds.fandom.com/wiki/South_Beach_-_2?oldid=265198"
Community content is available under CC-BY-SA unless otherwise noted.