The second ship has been sunken. The third one, Prince Porky's ship will be sunken next because he keeps throwing the iron cannonballs at the Blues for the Yellow Key.

The player has to engage 1 Pork Da Silva (Pirate Captain) and 1 Big Pirate.. Each enemy's stats are shown below.

Choose Matilda in Druid, Red in Samurai and Bomb in Pirate. Don't use Bomb's secondary skill when it has been expired, then, attack every turn with them (Pork Da Silva first, then Big Pirate second). When Big Pirate is almost ready to attack, use Red and Matilda's secondary skills on the bird with the lowest health. After Big Pirate or Pork Da Silva attacks, use Matilda's secondary skill on the bird with the lowest health to heal instead of attacking in every turn. Use the Rage Chili to Red when it is full. Repeat this over until you win or lose.

Pork Da Silva can summon Pirates, so beating him first is a good idea. Big Pirate can deal BIG damage to everyone, so watch out! 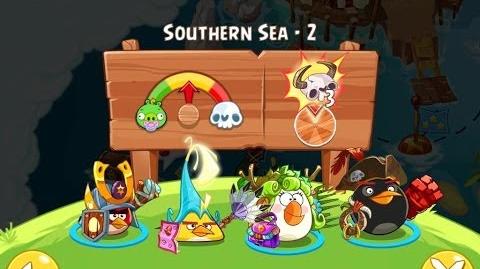 Retrieved from "https://angrybirds.fandom.com/wiki/Southern_Sea_-_2?oldid=217774"
Community content is available under CC-BY-SA unless otherwise noted.