The Space Piggies appear to be Earth's Bad Piggies (exception for Big Bork whom only appears in Space and seems to be an alien pig). How they came to be in Space or got their updated equipment is only explained in The World of Angry Birds Official Guide. Long ago, a group of Bad Piggies attempted to launch a submarine off Piggy Island's Shipwreck Shore. Instead, they found themselves launched into the galaxy. After initially pretending to come in peace, Space King Pig invaded every planet in the sector, claiming a moon tank and a claw as his own. Memories of their former island home gradually faded into legend, until the Angry Birds appeared in space. It is known that Space King Pig used his UFO's grabbing claw to steal eggs which caused the Flock to follow the claw through the wormhole and end up trapped in the world of Space. 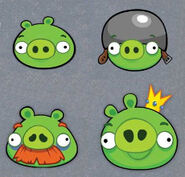 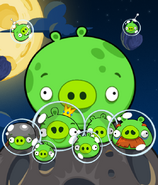 All Space Piggies (except for Alien Pig and Hekto Porko) 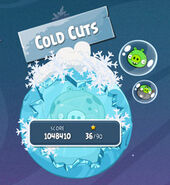 Piggy about to grab an Eggsteroid with a mechanical claw.

A planet lit by a star with a Pig on the background.

A real space pig from the NASA video. 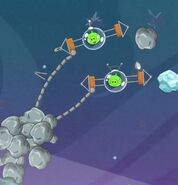 The pigs on pods. 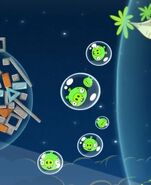 Piggies in environment bubbles, so they can breathe. Popping the bubbles will freeze the piggies, and they will shatter if they don't enter a gravitational pull in time.

Big Bork (in the middle) seen more larger (notice Big Bork larger than the satellite and the Utopian foods that Fat Pig eats.

Piggies on the moon. 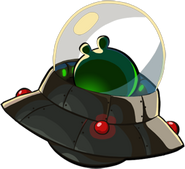 A piggy in an UFO.

All the Space Pigs. 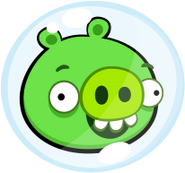 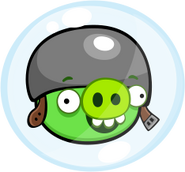 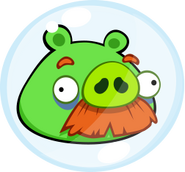 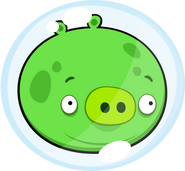 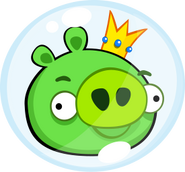 Pigs in the space

Fat Pig (also known as Big Bork in The World of Angry Birds Official Guide) combs the Universe looking for cosmic food to continually increase his size. He is massive with spots on him similar to the Incredible Terence. The description of the Fat Pig according to The Daily is: "As ravenous as he is disgusting". The World of Angry Birds Official Guide describes Big Bork as having mysterious origins — even he himself doesn't know where he came from. Even though Pigora, ancient piggy law back on Piggy Island declares the biggest pig to be king, Big Bork is too stupid to be king, having a brain the size of a malnourished pea. Big Bork is first seen incased in a large planet of ice in Cold Cuts. He then breaks free from the planet and moves to Utopia to satisfy his stomach.

His first appearance in game is in level 4-10 (Utopia) as a regular character. He is smaller than he is in 2-20. Despite his extreme size, he is easily popped. On the Angry Birds Facebook Page, a picture shows that Fat Pig has grown more larger because of it eating more Utopian food. Another thing to note about Fat Pig is that he resembles the original/old designs of the Bad Piggies than the current design.

The Fat Pig awaits the player on level 4-30, in which he is enormous and serves as a boss. Like its fellow pigs on Earth, the Fat Pig is also unintelligent, as it eats everything in sight, allowing hazardous objects to easily harm it.

The player must wait until the Fat Pig rotates so that the desired hazards can enter its mouth. The player can either knock asteroids into its mouth, feed it burnt popcorn by hitting the popcorn generators, or even hit the Fat Pig with the Birds themselves. However, only Space Bomb and the Incredible Terence will do any noticeable damage. Continuously feed the Fat Pig some hazards until he pops and coughs up an eggstroid, which cannot be obtained.

In the ending cutscene for Utopia, it was revealed that the Fat Pig had consumed the eggsteroid belonging to Ice Bird. Coughing up the eggsteroid reduced his size to a mere Space Minion Pig with spots.

The Alien Pig is a pig with three eyes, one above his nose. He drives a spaceship and can be seen in Cosmic Crystals Level 30. He ejects crystal planets. A beam of light also sucks up objects.

Porko's full name is Hekto Porko. He has red glasses and a black moustache under his nose. He appears as the boss in all Mirror Worlds level. He has no powers but a lot of different kinds of constraptions. About his size, he just like a regular Large Pig.

He will be popped with a hit by any bird (except for Blue Bird, which needs 2 hits to pop him) or by any blocks (except for glass block, which needs 2 hits to pop him). But if he is in a constraption, try to destroy the constraption and Hekto Porko with the birds as we have the strategies to pop Hekto Porko in each level page that have him.
Community content is available under CC-BY-SA unless otherwise noted.