The St. Piggies Day Tournament is the St Patrck's Day Tournament of 2019. It was a 2 week tornament. The 2nd week was a Octotournament. It added a new pig, the Leprechaun Pig, which if you popped him, a rainbow would show up in the backround. There was a new object to the root beer that the pigs would hold. It happened between:

Have the Piggies stolen your heart, or your gold?

It added several things such as: 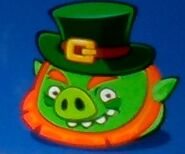 Leprechaun Pig
Add a photo to this gallery

Retrieved from "https://angrybirds.fandom.com/wiki/St._Piggies_Day_Tournament?oldid=236122"
Community content is available under CC-BY-SA unless otherwise noted.