Template:Epic Infobox Level Star Reef - 1 is the first level of Star Reef in Angry Birds Epic. It is a Normal stage. When this level is finished, the player may spin for 3 Hot Tomato. The following pigs are introduced in this stage:

Undead (Revive 2-3 turns after being knocked out.)

These spooky pigs are Undead. They revive after being knocked out as long as there is a pig standing!

Hint: Try to knock out as many undead pigs as possible at the same time.

The player has to engage 2 Zombies, 1 Stinky Zombie and 1 Will-O-Whisp. Each enemy's stats are shown below.

Choose Matilda in Druid, Bomb in Cannoneer and The Blues in Rogues. Heal with Matilda if the birds' healths are not full and if they're full, attack with her. Then attack with the others (All attacks focus on the Zombies first, then the Stinky Zombie and the last one, Will-O-Whisp). Repeat this over until you win or either lose. 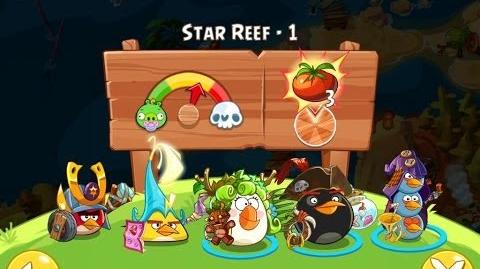 Retrieved from "https://angrybirds.fandom.com/wiki/Star_Reef_-_1?oldid=220103"
Community content is available under CC-BY-SA unless otherwise noted.