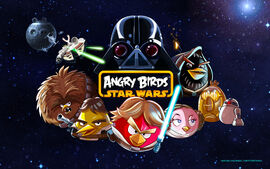 Star Wars Characters are the characters featured in Star Wars. The birds are based on the Star Wars characters from the Original Trilogy, the trilogy that includes Episode IV: A New Hope, Episode V: Empire Strikes Back and Episode VI: Return of the Jedi.

Retrieved from "https://angrybirds.fandom.com/wiki/Star_Wars_Characters?oldid=245255"
Community content is available under CC-BY-SA unless otherwise noted.