Summer Pignic is the sixth holiday themed Angry Birds episode and the fourth episode in Season 2011, is the summer solstice episode and as such, is available through Angry Birds Seasons. The setting is a field in the summer. The chapter was first announced on their Facebook page; and on June 20, their Facebook profile picture announced the name. The episode was released at the beginning of the Summer Solstice on June 21, 2011, and like Season's Greedings, each level is unlocked in an Advent-calendar fashion, and does not require the levels to be completed in order to access the others. This is the only episode to have space-themed levels, although there are only 2 (including one as a Golden Egg).

MAD HOGS GO OUT IN THE MIDDAY SUN
With the sun beating down, the birds thought they were safe on the grassy plains near the Golden Fields. Surely it was too hot for the pigs to go egg hunting? Wrong. King Pig doesn't care if his Minions sizzle in the sun. Distracted by a kite flying across the sky, Chuck took his eyes off the nest for a second and, well, you can guess what happened next.

The first announcement of the game on Angry Birds's Facebook 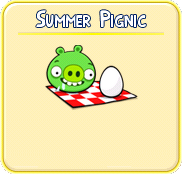