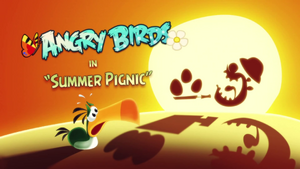 Summer Pignic Short Movie is a trailer released on July 20, 2011.

The film starts at level 30 of the Summer Pignic theme of Angry Birds Seasons. The birds are trying to save the eggs by launching themselves into the structure to defeat King Pig with The Eggs in the other side. However, they can't destroy it as they can't destroy the stone. The King Pig laughs while having the eggs in a saucepan, reading the "Bad Piggies' Egg Recipes" book and wearing sandals.

Hal wants to try the slinghot but accidentally bumps into it while Matilda is on, launching her away. Red gets angry at him and the birds resume their job, but still cannot break the structure, the King Pig laughs and birds still try. With all the birds injured and unable to do anything about it, Hal gets on the sling and flies right over the structure. The King Pig keeps enjoying the eggs until Hal comes when King Pig's mouth opens to eat the eggs. Hal uses his ability and shoots boomerang back to the structure, breaks it, gets the eggs back, and makes it explode, causing the Pig King to break all his teeth, and the structure to fall on top of him. Hal returns to the nest the eggs of the birds, and Jay gives him 3 Stars. Hal does a victory dance, and falls, once again demonstrating his clumsiness.

Hal in the film

In the film, Hal has a darker shade of yellow at the tip of its beak. In the game, which is a solid color. Also left in the air when he opened his beak, facing the game, were his way never stops, but falls as he turns around and flies up to where he started his career. Hal in the game also has something of a shorter bill with a curved top and has a round body. The film can also be seen in both eyes, but in the game, you can only see one.

Cast (By order of appearance)