TNT (Trinitrotoluene) Crates, also known as dynamite or TNT boxes, are explosive objects in the Angry Birds franchise, mostly used by pigs. Once struck, TNT Crates explode, destroying objects within a short radius, sending things flying away within a larger one. TNT Crates can prove to be quite useful for the player since a large, fortified structure can fall when blown up. TNT Crates appear in most of the games, with few exceptions.

In Angry Birds, TNT Crates are first seen in Poached Eggs 2-15, and if hit, they give the player 500 points and explode upon contact, they are useful for defeating pigs, if they are destroyed in a huge mass. They are wooden crates with a label written "TNT" on it.

In Birdday Party, there is the Exploding Cake. The exploding cake is a black cake with the words "TNT" on it. When hit, it does something a little different. Instead of causing a huge mass, it turns into frosting like balls and doesn't seem to do much damage from the TNT crate itself, though it has a similar idea.

TNT appears as the same object as in the first game, but there are some interesting variations of it, such as Black Pumpkins that act as TNT in Halloween episodes, Gas Tanks that give a small explosion, but they are also useful.

TNT appears as the same thing once again. There are some variations of it:

TNT appears as the same thing once again. There are also some other variations, such as fire meteors that explode in the same way and Rocket Propellers, that eject smoke and explode eventually.

TNT appears as a usable item that can explode in Bad Piggies. It can appear naturally on the levels, it first appears as a minor appearance on level 1 of Ground Hog Day. They can be used to launch Ross to high points. There are variations of it that can be obtained in Loot Crates or by putting scrap in the Scrap Machine. The special abilities of some are the following:

There are two variations of the TNT. The normal and iron. The normal is the same as before and the iron is harder to destroy, giving a bit more damage.

TNT appears the same as in the first Angry Birds Star Wars game.

In Angry Birds GO!, TNT crates serve as common, yet dangerous obstacles. They will blow up when collided into, slowing down the racer who crashed into them.

TNT appears in the levels of both story and tournament levels. It first appears in level 4 of Surf and Turf (if considered in the order of episodes).

In the weekly tournaments (Such as the Angry Birds Tournament), they appear as diverse variations, such as Barrel, Dynamite, Gift Box, etc.

In the Winter Tournament, there was a gift power up with gifts falling from the sky, then they unwrap into TNT crates, which all explode.

There is now a power-up called Boombox, that can be launched and parachuted at the pigs. If it reaches a hard object, it will explode. But, sometimes, it only gets damaged. There's also a TNT drop Power-Up in the Star Cup, that is made out of iron, parachute themselves and unwrap the iron if nothing is happening. Works the same as TNT.

They appear in the events, where they explode if an Autobot shoots at it. Useful to destroy structures and defeat pigs. They mostly appear as red boxes with a label that says TNT on it, but in challenge events there can also be a few variations:

They appear the same as in the previous games. There is a Rocket Pig that explodes after propelling himself a bit. There is also an Angry Pig, that explodes if defeated. See this page for more information.

TNT appears in some levels. They appear as red boxes that explodes and launches a bird upon contact. They are also dropped by Pilot Pigs.

TNT appears as multiple variations, such as huge, big and small.  They first appear in Bird Town, and then appear in multiple levels of the game. There are bombs, that act similarly, that are often launched by Mercenary Pigs.

Powder Kegs also appear in other levels, they behave the same way.

There is also the TNT Carrier Pig and Present Carrier Pig, that launch TNT at the birds.

They appear once again as the same and are used by the pigs into their structures. There's also TNT Drop power-up, that drops a TNT on the local of player choice.

They appear in some levels and work the same way.

Three TNT Barrels are launched by the Minion Pig if he is charged.

As the game itself is a board game, TNT appears as a toy, it doesn't have a mechanical special feature, such as expanding near magnets.

TNT is replaced by Jalapeño Boxes, which work the same way.

TNT is replaced by Chrome Bombs in Chrome Dimension, which works the same way.

TNT appears as the same, with no changes made to appearance. ​​​​​​

TNT appears as the same but they know have a Pistachio label on them and launch pistachios when they explode.

TNT with the pigs 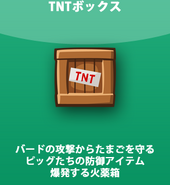 TNT promo - Translates as: TNT Crate - Protect the vehicle from the attack of the birds. Protection item, explosive fire box

Pigs about to jump on TNT
Add a photo to this gallery
Retrieved from "https://angrybirds.fandom.com/wiki/TNT?oldid=255942"
Community content is available under CC-BY-SA unless otherwise noted.