I asked Rovio personally if it is "Lazer" or "Laser". They said they are sticking with the 'z'. I'm a little disappointed actually that they will stick with an incorrect spelling, but so be it. AMslimfordy 17:38, March 9, 2012 (UTC)

The video trailer for The Daily's guide contained names that were not used in the final version of the guide.

The OFFICIAL names from the guide, as approved by Rovio are:

Please don't change these until/unless new information is released that contradicts this.

Yes, there is some discrepancy. But the videos are shot long before the final project is compiled. It is best to believe that the names Dr. Omega listed are correct. AMslimfordy 14:27, March 14, 2012 (UTC)

There are many things about that video that differ from the actual app. Laytout/Format, names, etc. I saw one mention of a space 360 degree image that I didn't see in the app. They did say updates to it will be coming, but the names look to be the final, official names.
New issue on official names - Helmet Pig vs. Major Pig. Seems that the iPad version of the Daily's guide is different than the iPhone version. Slim's says "Major," mine says "Helmet" DoctorOmega 15:25, March 14, 2012 (UTC) 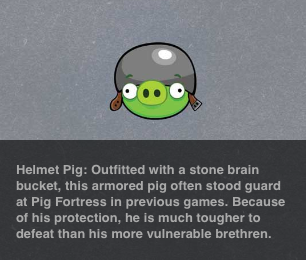 Hey, I made some of the Space Birds into scroll text by accident, I'm not sure how I did it, but someone please fix it. Angry Bird Piggy

Please note the above section. The bird names are pretty well established, and the "Black Bird" is called "Bomb", not "Powerbomb Bird" based on the latest official references. AMslimfordy 03:02, March 15, 2012 (UTC)
Also, as to the scroll box. These are typically done accidentally. In this case, it arose from the line

would remove it. The only difference is the space between the braces and text, but it results in the scroll box nonetheless. AMslimfordy 03:14, March 15, 2012 (UTC)

Slim's last edit was regarding Yellow Bird being a Canary. Has there ever been an official source to list what the species were? Or are we guessing until the Nat Geo book comes out in September?DoctorOmega 19:00, March 15, 2012 (UTC)

I saw on the red bird introduction that his name is Red Space Bird are you going to change it? —Preceding unsigned comment added by 173.212.116.71 (talk • contribs)

OK I will go with Red.

No, all Space Characters will be on this one page. Perhaps he can have his own section if the information is sufficient, but I'm not sure if that will happen. AMslimfordy 14:22, March 17, 2012 (UTC)

I Don't know what the space birds real name are. please write back

I think the names they are right now are the Official names. Angrybirdarmy

Oh Rovio, what a tangled Mess.. Let me see if I can help straighten this out. The early promo for the Daily guide and some of the artwork shown in their has their early names as:

It was found that these were early placeholder names and once the Official Daily Guide came out, we had their official names.. which were mostly their regular names, not much "spacey"ness about them:

However, once they started introducing the birds on the Web site officially, they made some changes to be even more vague but only in the titles to the videos on YouTube:

So, what is the 100% official names for the birds? At this point, we can't be 100% sure, but we can go by the last last or two. I don't think Rovio would balk too much if you call him Red Bird or Red or Blue Birds vs. The Blues.. There is a book coming from Nat Geo in September that is supposed to reveal their names, personalities, etc. for the first time officially. Hope that helps!

Ok, to figure that out earlier if we need to, someone needs to ask Rovio. Angrybirdarmy

When you are in a gameplay and Lazer Bird is in there you'll notice that he doesnt have a cape...im confused...It would be Epic when he has cape in Gameplay...

No, all Space Characters will remain on this page alone. In a similar fashion, Blu and Jewel were new in Rio but appear only on the Rio Characters page. AMslimfordy 15:12, March 29, 2012 (UTC)

Space King Can Be Frozen By Ice Bird

In Cold Cuts 2-30 you are in a boss fight...First Fire Red Bird and Lazer Bird Somewhere you will target...then Ice Bird Will Be Next Jumping to the Slingshot... Aim Him to The Space King Really Carefully...then When Ice Bird Gets Near the Space King's UFO...Then Tap it so The Ice Bird will Freeze Space King into Ice...That Was All...Did Anyone Tried this? Flamerz123 02:22, April 1, 2012 (UTC)

Sometimes the Space King Will Not Be Frozen when you tap near him...I tried that...Flamerz123 03:10, April 18, 2012 (UTC)
You can also kill him with Bomb Bird if you are really careful, and the UFO will be empty and still moving!

Do Any of you know if the Skunk like Bird posted on their Facebook Page is Real or not? I seen on the comments and people thought it was real and some thought that it was an april fools prank. Could this be a new bird in the next update because I think most people saw that in the next update you could launch birds at the space needle

Will You Keep Skunk Bird on Space Characters and Update the information because it still says Ewww! When the name is now official and is Skunk Bird (Facebook and Twitter said) Also Could someone tell me about the 4 star joke

Skunk Bird/Ewww was removed from the Space Characters page as it was an April Fools Joke. If you are still seeing it on the page, you may need to refresh or clear your cache (try pressing the F5 key if you are on a PC).
You can see the explanation of the joke on the Angry Birds Facebook and Twitter sites. However, I have created a Joke Characters page for characters like Skunk Bird and Coco Bird. DoctorOmega 20:53, April 1, 2012 (UTC)

Where is the Fat Pig? I'm not seeing him anywhere in the game. Brendan The Bomb Bird

Are the noises really necessary? People have different opinions on how to spell each noise and starts a huge hassle. Qazqaz555 21:45, May 8, 2012 (UTC)

What happened to all the info?

After the red planet's second update, I noticed that Lazer Bird's cape was included in levels. I was wondering if somebody could put that in the page scince it's locked. Boomerang 19:44, November 2, 2012 (UTC) The Boomerang

In the newest update, V 1.3.1, the Lazer Bird's sprite during gameplay changed! Instead of having no cape and having a tail, his new sprite in V 1.3.1 received the cape and doesn't have the tail anymore, just like in the cutscenes in Angry Birds Space and the Loading Screen! I'm pretty sure people can now play as the Lazer Bird's TRUE Sprite! :)

Add a section for the space fish

It's not really a character, it's just the landscape in the Pig dipper levels.

I totally like SPAAAAAAAAACE (try not to be random) Red Bird's Space design, preeeeeeeeeeeeeetty cool, so?

You can put the layout in two different ways instead of just mixed. Even if the Ice Bird has its own page, please put it on. Layout styles:

Retrieved from "https://angrybirds.fandom.com/wiki/Talk:Space_Characters?oldid=128510"
Community content is available under CC-BY-SA unless otherwise noted.