Angry Birds Movie 2: Prank Attack VR is a Virtual Reality experience game developed by Hologate and published by Rovio Entertainment on August 20, 2019, at Gamescom for early access and on September 24, 2019, worldwide. This game is a Hologate exclusive, meaning you will have to book a gaming cession at one of their locations in Singapore for around US$20 (28 SGD).

The Angry Birds Movie 2: Prank Attack VR was first announced on August 8, 2019 by Hologate as an upcoming game and a promotional trailer for the game was shown on YouTube.

The game experience is inspired by The Angry Birds Movie 2, and acts as a precursor to the events in the movie which finds the flightless birds and scheming bad piggies in the midst of an ever-escalating prank war. It's up to you and three of your Bird Buddies to stop them from turning your idyllic home into a messy, smelly... Pigsty! Armed with your trusty slingshot, you must blast the baddies with coconuts, melons, bowling balls (and anything else you can get your feathered fingers on), to repel the Piggy Fleet from Bird Island! 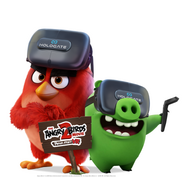