The flightless birds live their lives in peace in Bird Island, after the war for the rescue of their eggs and reconstruction of their village. However, Leonard (King Mudbeard), after the destruction of his city and castle in the war, puts his revenge in practice with new assistants, leading to another (But small) war involving the birds and pigs.

However, a purple bird named Zeta, tired of living on a cold island, starts to put the lives of both the birds and pigs at risk, making them put their differences aside and embark on a new adventure to end this plan and save their lives.

Template:SpoilerThe movie starts with Bird Island's inhabitants utilizing the slingshot transit system to get to where they need to go across an expanded Bird Village. Some are enjoying the beach, Vincent, Zoe and Samantha are building a Sand Castle, then, Red pops out of the sand, he demands Bomb and Chuck to look at their binocles, Chuck sees a pie coming out of nowhere, Red then takes Chuck's binocle and looks at it, they get scared and bend down, but the pie hits a duck 's face, they apologize.

He starts blocking the places to Leonard do not enter and then puts him in the floor tied by ropes, he asks what was him here for, Leonard says that there's a third island and it may destroy all of the birds and pigs. Red is not convinced until Leonard dispatches SQUEAL Team Six, hiding throughout the house, to reveal the drone photos to him.

All the birds and Mighty Eagle get shocked about Eagle Mountain's destruction, but not Zeta. Then, they start walking to the Pig Submarine, which was thought to be small but later is revealed to be the huge machine full of devices and inventions made by Garry, a smart tech pig.

Meanwhile, the three hatchlings are paddling a raft and get the eggs, but a blue whale appears and lifts them by launching a water jet from the blowhole, making the eggs fall into a cloud. Then, Zoe puffs herself up and flies to get the eggs but she and her friends go to space, but the tied beak gets untied by hitting a spacecraft. The Piggy Submarine reaches the Eagle Island and opens its snout, showing the heroes with winter suits, but they slide on the iron and fall on the snow, they talk about the plan and say about Zeta, which Mighty Eagle remembers about the days of his relationship with her and the abandon of her on the marriage, Silver asks why he did it, he says that he was a coward and flees away.

Then, the eggs fall into a small island with a palm tree, Zoe and her friends find a mother Boa Constrictor with the eggs and defeat it, taking her skin and teeth as clothes, they then build a boat with a palm tree leaf (Not shown) and then reach a beach, which they thought was Bird Island, but was revealed to be Piggy Island, they find three piglets and they call them to ride a big zeppelin.

The members of the mission start to continue discussing about their plan, Red asks how Leonard and the other members (Except Silver) would reach the cannon, they then show Harvey, an eagle suit, but Red isn't happy as they friends are giving too many good qualities to it and starts imagining him being alone with Harvey and his friends ignoring him. They then ask what was happening with him but he says that he is good, and Red starts to go alone to save both of the victim's islands. Silver wants to rebuild Red relationship by associating with him. However, Red wants to go by himself. They start spilled up. Red and Silver climbing up. Red tries to keep struggling through he keeps missing things. Leonard and the others disguise as Harvey, going to the entrance of Zeta's facility, but Carl and Jerry were guarding the door.

Red and Silver continue their track, they jump into the volcano with ropes tied to them and get into the base, Red cuts wire with a scissor, thinking it was the cannon's wire. But it shows that it was the wire of Carl's microwave with his lunch, he gets angry as it stopped working and cooled down it. Meanwhile, Harvey bumps into barrels and  finds a code pad, he tries to open it, but he doesn't know the code, Leonard has the idea of stealing Brad Eagleberger's keycard and starts walking towards him to get his keycard, they get into the bathroom, which Brad Eagleberger is urinating, Harvey then starts to disturb him, which he is forced to leave. Chuck picks up the keycard, but it ends up brutally injuring him. Harvey then leaves.

Chuck notices Hank with Red and Silver and tries to save them, he pedals Harvey, but its legs get too fast that it rips the fur and breaks, the team gets revealed but they go to behind to make a better plan.

The Angry Birds Movie 2 was released on digital and Movies Anywhere by Sony Pictures Home Entertainment on October 29, 2019, with Blu-ray, Ultra HD Blu-ray, and DVD releases set to follow on November 12. All releases will include an animated short film entitled Live Stream. The Ultra HD Blu-ray version will be the first release of its kind to be IMAX enhanced. 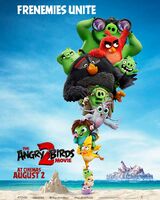 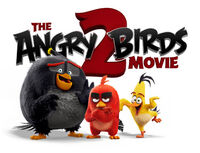 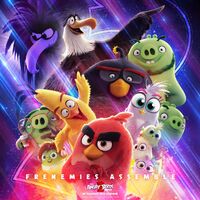 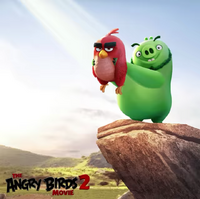