Now it's our turn to hit the silver screen! The birds and pigs from The Angry Birds Movie 2 are starting a prank war and it's cause for a great set of tournaments.

It's Bird Village with the houses of the Early Bird , Monica , Elder Bird and Alex  visible. Behind it, there are a bunch of trees such as palm trees and cherry trees.

In the foreground, there is a beach with red sea stars and the sea.

It's Eagle Island with a bunch of snow, pine trees, hills, and the Ice Ball Volcano is visible in the far background.

In the foreground, there is a bunch of snow with ice cubes.

The tournament is dedicated to the release of The Angry Birds Movie 2, and its place of action is Eagle Island. One of the most significant features of the tournament is the appearance of the Zeta boss.

Snow-covered forests and rocks in purple hues are visible in the background, and even further there is a volcano where the Zetas base is located, according to the film. The sky is presented in delicate lilac and orange tones. In the foreground, ice cubes and a snowy surface are visible.

The constructions on the levels try to resemble the base of the eagles from the film. Observation towers, ice buildings and other structures resembling different places and moments of the film are found everywhere.

Baby in the ice block

Pig in an eagle costume 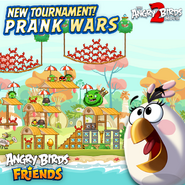 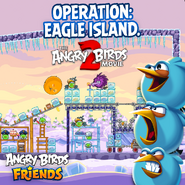 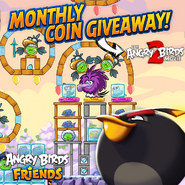 Add a photo to this gallery
Retrieved from "https://angrybirds.fandom.com/wiki/The_Angry_Birds_Movie_2_Tournaments?oldid=255128"
Community content is available under CC-BY-SA unless otherwise noted.