The Lightning Birds are transformations which appear in the Angry Birds series. It is an alternate state of The Blues, achieved by passing through a wormhole.

After their first appearance in the Pig Bang episode, they will appear in all of the following episodes as playable characters.

Through the portal, the birds are transformed into their space counterparts, along with the Blues. They fly out of the portal into the final frontier, beginning the events of the game.

The Lightning Birds' appearance is based on the Flash, though their ability has nothing to do with speed.

The Lightning Birds, along with all of the other birds (excluding Atomic Bird) received their own promotional videos that can be found on YouTube and their own merchandise.

Their launch noise and corpse noises are just modified versions of their original.

The Blues are also commonly placed after Ice Bird, due to their compatibility with destroying ice/glass. 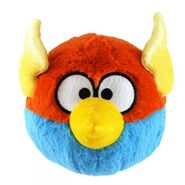 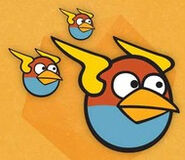