For the Angry Birds Stella Toons episode of a similar name, see The Portrait

The Porktrait is the seventh episode of Angry Birds Toons Season 3 and the eighty-fifth overall.

Admiring the portraits of past leaders, King Pig tries to take the perfect snapshot to inspire admiration in all pig kind. Tries.

King Pig and Foreman Pig could be seen walking through a corridor in King Pig's castle, admiring the portraits of past pig leaders. Suddenly, King Pig saw an embarrassing portrait of himself crying for having no eggs to eat. Naturally, he wrecked the portrait. He then wanted Foreman Pig to do something about it, who then came up with a brilliant idea.

In the next scene, Foreman Pig showed King Pig a suit of armor. King Pig was eventually shown trying to fit into the armor (barely since he was just too fat). Meanwhile, the other minion pigs were preparing for King Pig's shoot. One of the minion pigs showed a pig dressed like Red his Chuck costume, but after mistaking him for the real Chuck he screamed in horror, dropping pages that seemed to be a script.

Once everything was set, King Pig and the minions were ready for King Pig's shot. There was an initial problem where the minion pigs and King Pig were thought to say cheese. However, Foreman Pig did not want that, so he told the two pig crew members to get out of the shot. Soon, just as Foreman Pig was about to shoot, King Pig toppled. The two Minion Pigs left (dressed as Red and Chuck) tried to support King Pig but it was too much. Eventually, when the camera flashed, the resulting shot showed King Pig falling down on the Bird Minion Pigs. King Pig was fuming at Foreman Pig for such a terrible shot, who then ordered a second take.

Just then, Corporal Pig arrived. He was horrified to see "Red" and "Chuck" attacking King Pig. He ordered a platoon of Minion Pig troops to attack the birds. Just then, Foreman Pig took the second shot which showed the Minion Pig troops and Corporal Pig attack the Minion Pig birds. After the mayhem was over, a cat sound effect can heard, meaning that the cat, offscreen probably got hurt during the fight. Of course King Pig was disappointed again. Then, his shoulder plate came flying out and knocked out one of the minion pigs pretending to be the Birds' egg (the other two painted the shoulder plate white).

Then a few more shots came. Shot 3 showed King Pig slipping over a banana peel (thrown by the two Bird Minion Pigs who were eating bananas). Shot 4 showed King Pig being angry over the two Minion Pigs who were roasting marshmallows instead of focusing on their job. Shot 5 showed King Pig showing his buttocks to the Minion Pigs Eggs (all the minion pigs in the shot were seen laughing at King Pig for his action.) Shot 6 shows Tenor Pig being shocked that his piano smashed on top of King Pig. In preparation for shot 7, Foreman Pig was seen stacking cards in the attempt to make a standing card pyramid while the two Bird Minion Pigs were goofing off. King Pig became super angry and started threatening the two Minion Pigs to do what he wanted them to do or suffer. Foreman Pig then saw the picture shot and told them to stay as they were. Then the inevitable happened. Pieces of armor were seen shooting from King Pig. This caused an explosion to take place in the castle and the two Minion Pigs Birds were seen flying from the castle.

Almost had that perfect shot... 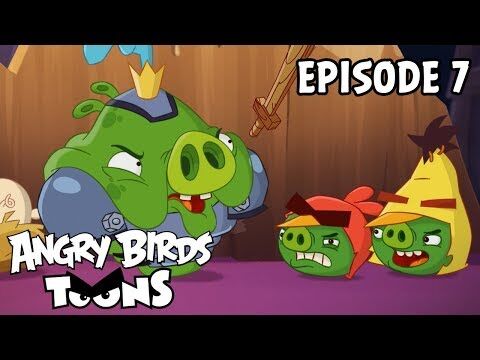