Thief Pig is a pig that appears in the Angry Birds series who debuted in Angry Birds Evolution.

He is a pig but with a robber's clothing.

He steals stuff from other characters and he is against the birds like most pigs.

Thief Pig makes his debut in Angry Birds Evolution as an enemy who can steal stuff forcing the player to pay him gems. He however doesn't deal any damage to the player. He can also get away during battles.

He appeared in four episodes which were Holiday Heist, Cops N' Robbers, Getaway Loot and Pigs Can Fly. 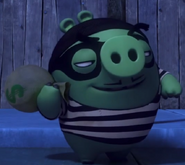