Tiffany is a bird in Angry Birds Evolution that can be obtained regularly in the hatchery.

Tiffany is the peppiest, preppiest and some would also say, the scareist cheerleader, in Bird Town.

If she's cheering for you, you better not lose. Unless you want to lose your life, too!

Fun fact: She washes her pom-poms in the losing team’s tears

She is a normal peach-shaped white bird with long wings, yellow beak with thicker top part with a red tip, gray feathers on the chest, horsetail white feather hair with red tips, long orange talons, two large eyes with blue irises, large eyelashes and small eyebrows. There are also two yellow feathers on her left cheek and red ones on her right one.

She wears a red bow in her hair.

She now wears a cheerleader uniform that is mostly light green but blue in the middle, there are two stars on the right of the uniform.

She was creepily grinning with perfect teeth, her eyes were almost closed with peach eyelids, her white feathers were more grayish, her hair feathers were thinner and with red tips, her beak had a nostril and was shorter, her eyebrows were bigger and brown.

She wore a a small blue shirt with red and white lines on top and bottom with a tied part.

She wears a cheerleader outifit.

Roll out spiky carpet, dealing 68 damage to any enemy in its path and leaving behind a zone. Each enemy hit  within the zone spawns a Power Up.

Roll out spiky carpet, dealing 88 damage to any enemy in its path and leaving behind a zone. Each enemy hit  within the zone spawns a Power Up.

Attract cheerleaders to the battle to support the team. Additionally, spectators are more likely to drop Power Ups the more set birds are present.

As her rarity is low, her strength is not so good, but she can be evolved or then awakened to become stronger. Totems and Runes can also help. 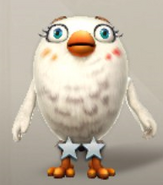 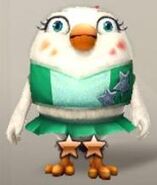 Evoled.
Add a photo to this gallery 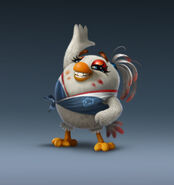 Artwork
Add a photo to this gallery

Retrieved from "https://angrybirds.fandom.com/wiki/Tiffany?oldid=254710"
Community content is available under CC-BY-SA unless otherwise noted.