Males and females.
Tigers are animals in the Angry Birds Series.

Tigers are the biggest big cat in real life; they are orange felines with unique black stripes, white beard and front body, long tails with white ends, long ears with black and white parts and white spots above their yellow eyes which have a special night vision that they use at night to hunt.

The tigers that appear in Angry Birds Friends! are the Malayan Tigers (Panthera tigris jacksoni).

In Angry Birds Friends!, they appear in the WWF Tiger Day Tournament, where they were captured by the pigs, in which the birds have to save them by breaking their bamboo cages.

They appear in the WWF Tiger Day Tournament as said above. There are three in each level. Some can appear without cages, while most appear caged. They also appear with bushes behind them

They appear sad in the levels, as they are captured. Their bamboo cages are hard to destroy, but Terence and Bomb can destroy the cages easily. Flinging any bird to the tiger can free him. After being freed, the tiger will start to claw any object or pig, defeating them easily, which the tigers jump to the bushes behind them and give 5000 points.

In Angry Birds Holiday, the tigers appear in Chuck's animal watch, interacting with the background. They appear

In Angry Birds Seasons, Tigers appear in The Pig Challenge Tiger Day Level, where they are made out of wood. Two tigers appear in love, one is a caged cub, one appears following a fishing rod with a fish and four appear normal.

Another tiger appears as a cameo in Moon Festival, as a statue with a rabbit.

Some facts about Tigers. 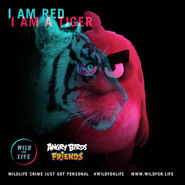