Tommy is a strong bird in Angry Birds Evolution  that can be obtained at any time in the Hatchery.

Tommy’s a very special member of, uh...no team. His brief stint as a quarterback for the Bird Island Beakers ended after he threw rancid mustard at the opposition.

Personal superstition: won't get on the pitch until he's tickled a zucchini.

He is a trapezoid-shaped strong red bird with large wings that end on blue feathers, a large brownish white beak with a dark brown part, a wskin face with almost closed eyes with brown irises (The right one is with a purple mark), black marks below the eyes, bushy black eyebrows, dark brown talons, a bunch of feathers foe hair, a blue tail and the belly is with an orange feather square surrounded by a white feather frame.

He wears coconut shoulder pads, painted with white squares and ''BRD''. He also wears a tribal becklace with blue, green and yellow ribbons and a bandaid on his left eye. These features imply he is a Brazilian Red Macaw.

Some of his teeth is now broken and he wears a white large cloth to protect injuries and a watermelon helmet painted with a red 0 and 1 and it has a wooden belt.

Kick an enemy, dealing 534 damage and knocking him around, damage to any enemy he hits. at the end of hits movement he explodes dealing dealing additional damage to all enemies around.

Kick an enemy, dealing 688 damage and knocking him around, damage to any enemy he hits. at the end of hits movement he explodes dealing dealing additional damage to all enemies around.

All red birds in team get +30% attack power.

As his rarity is a bit good, he is a bit strong. Evolving him will make him stronger. Totems and Runes can also help. 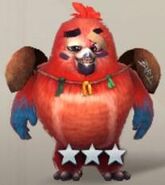 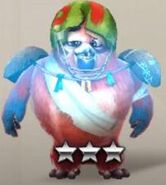 Collection Evolution
Add a photo to this gallery
Retrieved from "https://angrybirds.fandom.com/wiki/Tommy?oldid=251687"
Community content is available under CC-BY-SA unless otherwise noted.