Trapped Pig is a pig in Angry Birds Friends! that appeared in the Double Trouble Tournaments, during the T-Bone vs Pigtoking Tournament and Halloween Mania Tournament levels.

He is a scared pig hologram that is trapped in a Monster Trap that has yellow and black trapdoor, red lines and a black switch and lever. There are lightning bolts when it opens.

The Monster Trap appears as an object in the levels, smaller birds such asRed and The Blues can only open it and then any bird can defeat the pig, heavier birds or Powered-Up birds will destroy the trap easily. The pig is required to be defeat in order to complete the level. 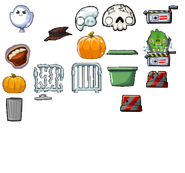