Not to be confused with Trick or Treat Castle.

Trick or Treat is a dark forest theme underneath an orange sky during nighttime. At the background, many pine trees can be seen behind the Moon. The soil is brown/gray in color. There are also many dead trees that are purely black in color.

As with all the other episodes in the game, the main goal of Trick or Treat is to pop all the pigs in the levels by launching a limited set of birds using a slingshot. The pigs are sheltered inside structures, some of which might resemble actual buildings and vehicles. In addition, there are many pumpkins, which will give the player some extra points when they are destroyed. On the other hand, destroying pumpkins that resemble jack-o-lanterns will award them 3.000 points and will play a high pitch sound of a witch laughing. There are also black jack-o-lanterns, which explode when hit, similar to TNT. 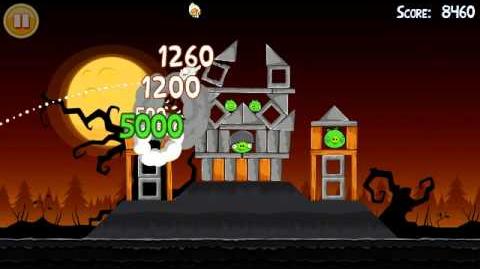