Tropigal Paradise is the twenty-first episode in Angry Birds Seasons. It is the first official episode of the Season 2015 package. It was released in April 2015 and is celebrating Spring Break in Hawaii. 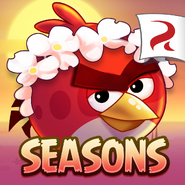 Add a photo to this gallery
THE APP

Retrieved from "https://angrybirds.fandom.com/wiki/Tropigal_Paradise?oldid=199370"
Community content is available under CC-BY-SA unless otherwise noted.