The Tusken Raider is a character that appears in the Angry Birds Star Wars series. He is a pig who resides on Tatooine.

The Tusken Raider is a small, triangle-shaped pig who has most of his body covered in bandages. He has two len-like devices covering his eyes, and also has many spikes on his head.

In Angry Birds Star Wars, the Tusken Raiders appear as enemies on Tatooine, being first introduced in Tatooine 1-1. Similar to Minion Pigs, they are weak and can be defeated easily. Also, some Tusken Raiders can be seen using laser weapons.

In Angry Birds Star Wars II, the Tusken Raiders appear as enemies in the Bird Side version of Escape to Tatooine, being first introduced in 2-1 of the aforementioned chapter. They also appear in the Bird Side version of Master Your Destiny, in the Escape to Tatooine section of the chapter. In this game, they look and behave identical as they did in Angry Birds Star Wars, though they are never seen using any weapons.

In addition of being enemies, the Tusken Raiders also appear as Pork Side playable characters, though they are never actually introduced in any point of the story; instead, the player needs to use them as power-ups. They can be obtained by buying them at the shop, at random chance by melting Carbonite, or by opening gifts.

The Tusken Raider has some strength, being able to break glass and wood. When tapping onto the screen when they are launched, an unseen entity will aim towards the area the player tapped onto and will proceed to shoot there, destroying objects and killing the enemies it hits. The Tusken Raider can also perform this attack when he is hit, though the player will only have one second to use it before they are unable to do so.

The costs of the Tusken Raider at the shop are as follows:

By collecting three hundred thousand points using Tusken Raiders, the player will also unlock an extra level in the Pork Side of the Reward Chapter for said character.

Some Tusken Raiders are equipped with laser guns, which they can use to attack enemies. 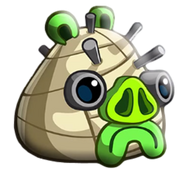