This article is about his normal version, for his Christmas version, see Tyler The Festive Surfer.

Tyler is an Angry Birds Evolution bird that can be obtained at any time in the hatchery.

This bird was born to partyyyyyy!

Sadly, due to his chronic beak breath and a recent bout of birdpes, he usually ends up getting jiggy on his own.

Personal Anthem: Do the Funky Penguin

He is a strong blue bird with two moderate wings, an orange beak with a larger jaw and a black ring around it, two orange talons, large eyes with gray irises, a square head,a hair of dark teal feathers with one of them like a horse tail and a small tail consisting of the same type of feathers.

He wears yellow heart-shaped glasses that hide the shaved eyebrows. His eyes have grey irises.

In Angry Birds Friends, he is classic and fat.

His head is now shaved and showing skin, there is sunscreen on his jaw and a heart tattoo on his right arm. He wears a dark brown necklace with yellow, green and purple balls and a a shark teeth pendant hung with iron wire, he also wears yellow shorts with white parts.

He is the same but there are light blue shirt and shorts marks on his body.

Appearances in Other Games

He appeared in the two weeks of the Join The Evolution Tournament, where he would hatch from a Premium Egg after a bird hit it. He would then appear next to the slingshot but wasn't playable, he appeared in 4 levels of the tournament, two times each week. 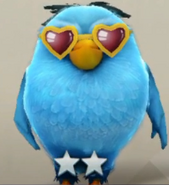 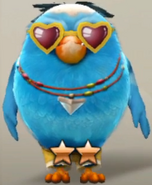 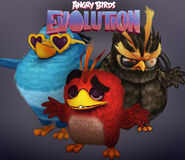