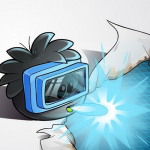 I am a Goggle Bird, I'm one 1/2 Red Bird, 1/2 Misc, not much i can say about my life that isn't said on my Wiki. but my experience with the Birds has been More than your Average game of Angry Birds...

You see, just like Ernie, I was a captive. and I had tried escaping many times. One day, when I almost escaped, I passed out in the middle of the beach. The pigs recaptured me. They didn't put me in chains this time, so I beat them all up and knocked out an unbeatable pig. Then I snatched his pair of power-goggles off of him and followed two birds back to a village, where they accepted me into their flock. Ever since, I have been a member of the flock.

Rainbow Bird and the Chili

one day, Rainbow Bird was Trying to eat his Chili in 30 seconds (i don't know why) he burned his Mouth really Bad, he had to eat 10,000 ice cube to cool of his mouth, and Ernie got burned. i Didn't feel bad for Ernie, he was making a joke about my glasses when he got burned

i have an abilty to turn anything i eat into a Bubble. and One Day, Rainbow Bird was asking me why i like skittles while i was in the middle of blowing a Rainbow Skittle Bubble, and Rainbow Bird Got caught in my Bubble. i had to jump at him to pop the Bubble.

you See, i'm nearsighted and i have astigmatism, so i wear Glasses. i sometimes don't wear them, and instead wear my typical Goggles.anyway, Rainbow Bird was showing us some cool tricks on his Skateboard, when willy said i should Try. i wasn't going to risk it, but Everyone agreed. and i learned some cool tricks. when i fell, and Willy moved the wrong way and crushed my Glasses. so we went to LENS CRAFTERS to get new ones (this is the same place i got my first pair) they Didn't work, we went back, got new ones, but in the Same frame as my Old ones. now i have my Glasses and everything is normal... Mostly everything, i'm still mad at Willy

Icey, Me, and The Eggsteroid.

one day, Icey Was Gone, and he left His Eggsteroid out in the Open, so i Moved it to where No Pig could Take it. but i knew Icey Would freak out if i Didn't leave a Note for Him. but then i Realized a pig could see the Note, Take the Eggsteroid and Icey would be mad, so i gaurded the Location where the Eggsteroid was Hidden, but then i realized i was Getting tired, and if i Fell asleep, a pig could Take the Eggsteroid. so i drank some Coffee (that was Stupid!) and i was awake that whole time, and no Pigs came at all. when Icey got back, he was mad i moved his Eggsteroid. so he challenged me to a Ice Fight. i won. (i can mimic ANY Bird) he was Frozen.

My Space Sprite (Although i NEVER appear)

This Isn't My Sprite, It's my Mom's

OUCH! my Mom's Corpse Sprite (I hate it!)

Blacky, My Dad, in Space Form

Blacky When he Hit a Wall Chasing the Pigs

Paulie Before he PERMANENTLY turned into a Lazer Bird

Paulie's Corpse Sprite
Add a photo to this gallery

Ernie After Tyler Got Mad 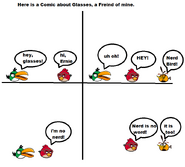 A Comic about Glasses, AKA me 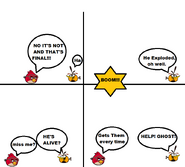 What Happened
Add a photo to this gallery
For the rest of Daniel's Storys, go to Angry Birds Story Wiki
Retrieved from "https://angrybirds.fandom.com/wiki/User:Daniel_T._Goggle_Bird?oldid=126395"
Community content is available under CC-BY-SA unless otherwise noted.