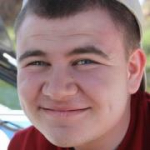 Hello, everyone! My name is Ryan K. Keim, I'm 18 years old and I'm from Mesa, Arizona along with my family. These are my parents, my mom who loves me all the time and tries to be a good boy and my dad who is been an artist, hunter, home remodeler for my house and the executive for Itron, Inc. for Los Angeles, California. These are my three brothers, the oldest is 20-year old Kyle who goes to work at Cafe Zupas at Dana Park where Aunt Tara and Uncle Scott lives here for 5 years as the Turner Family in Dana Ranch. That's 18-year old me, since I moved into Arizona in 2005 for 8 years and I've been an architect since I was one of my childhood ages. It starts with ages 11 in 2006 12 in 2007, 13 in 2008, 14 in 2009, 15 in 2010, 16 in 2011, 17 last year and as of 2013, it's 18. You know 13 and 14 are two of my totally favorite numbers and I was diagnosed with autism since I was 4 years old And these are two of my brothers that I most like about is Derek, who is 15 years old, since he's been practicing piano lessons to Sister Larson from the Larson Family, and finally Trevor, who is 12-years old, he's been playing Monster Hunter 3 & Tri on the WiiU since it had been released on Capcom, drawing Pokemon and his drawings for Trevor's lifetime, that angry eyebrow's look on innocent people's pictures are not so funny at all, but it looked too hard and rough on them. Monster High, Looney Tunes/Merrie Melodies, Disney, The Muppets and other animated stuff that's looks too artistic and hand-drawn for me that I could imagine are the most best and awesome than ever, but the animation on TV-14 and TV-MA rated shows such as South Park, Family Guy, and American Dad along are too graphic, gross and totally bad for me. The Lion King is my favorite movie ever since I was a little autistic kid, since I loved the award-winning animation of Tony Fucile, Andreas Deja, Russ Edmonds, Ruben Aquino, Mark Henn, and other animators from Walt Disney Animation Studios in Burbank, California. My architectural favorites are Bassenian-Lagoni, KTGY, JZMK, and other of my favorite architectural firms. Plus my favorite color is Red. Since last year in Spring Break, I went to Universal Studios Florida to see Woody Woodpecker, my favorite Universal Cartoon Character and the ride on the Simpsons from Krusty Land when I was laughing out awesomely loud about the humor of 3D animation of the roller coaster and steam effects, and I was laughing at the destruction of the earthquakes at the Croods' in March 22nd that it had been premiered 2 months ago. Plus my favorite franchise is Angry Birds and Epic Mickey video games that it had been released 3 to 4 years and my favorite video game is Epic Mickey and Epic Mickey 2, along with Nintendo Land and other of my favorites. My favorite dinners are Breaded Chicken Tender Strips and French Fries and Pepperoni Pizza with one of my favorite vegetables, radishes, carrots, celery, and bell peppers along with pickles. My favorite snacks are Goldfish and Pretzels (Sourdough Pretzels), Cheez-It's, Cheetos, Taki's, Doritos' and other of my favorite snacks and foods which were good. My favorite fruits are apples, grapes, and bananas. My favorite breakfasts are Cheerios, Lucky Charms Marshmallows that came here from cereal, bagels, bacon, sausages, french toast, and waffles along with scrambled eggs. So, I can continue my life as of right now, and thanks to all of you for introducing me.

Retrieved from "https://angrybirds.fandom.com/wiki/User:Keim1995?oldid=82866"
Community content is available under CC-BY-SA unless otherwise noted.