Mighty Hoax is the second episode of Angry Birds, which contains two themes with 21 levels each. Much like its preceding episode, it takes place once again in the vast plains. In this Cutscenes, the Pigs try again by stealing the bird's eggs, replacing them with cardboard cutouts, and using cardboard decoys to get away.

When the Birds complete Theme 4-21, they discover the King they defeated was in fact a cardboard cutout, and that the real King is still out there. Later, the Birds finally succeed after destroying another cardboard cutout in Theme 5-21 and retrieve the eggs. The real King Pig retreats while the Birds celebrate their temporary victory. 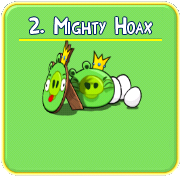 Retrieved from "https://angrybirds.fandom.com/wiki/User:King_Hoggy_20-02/Draft2?oldid=197529"
Community content is available under CC-BY-SA unless otherwise noted.