Utopia is the 4th episode in Angry Birds Space. Other foods in Utopia are popcorn, popcorn kernels that explode into 3 pieces of popcorn, wrapped candies, a waffle-like substance with maple syrup, donuts, cakes, and candy apples. In the background, Utopia has a dark pink sky with stars, pretzels, and clouds of frosting floating in the background. In the menu and first part game/level selection screen, the planet looks like a strawberry frosted doughnut covered with popcorn, lollipops, and wrapped candy, and Fat Pig is seen on the top left corner of the doughnut planet and a Pig eating the doughnut in the middle of it, just like the "Coming Soon" cardboard planet before the update. Multiple features were added in this update. Fat Pig has been added to this episode, and this is the first episode to feature Fat Pig as a boss.

Before the release of Utopia, the "Coming Soon" cardboard planet showed a pig eating a donut that was inside the cardboard that had a sign saying "Free", implying that a free version of Angry Birds Space would be released, however, this has yet to happen. However on June 17 and the 21st as the HD version, the free version was eventually released that only included the first 10 levels of the episode Pig Bang from Angry Birds Space. (all levels in the current version)

This chapter also introduces Bubbles, who went to space and became Atomic Bird.

This episode also introduced popcorn, which is similar to the ice meteors that first appeared in Cold Cuts being that the kernel splits into three popcorns when punctured. It also had burnt popcorn. This is the first update in Angry Birds Space that didn't come as a full episode.

The pigs have an added chewing animation. Also, in addition to laughing, snorting and grunting, the pigs mainly make chewing, crunching, smacking, and burping noises.

Utopia's planet is a giant Donut. This is the first episode to receive more than one planet design: a cookie, a doughnut, a key lime pie, a jelly planet, and a caramel apple. This is the first time the Fat Pig appears as an enemy (first appearance level 5-10) and as an enormous boss (level 4-30). Bubbles appeared in the last update of Utopia, which came out on July 23, 2012. It first appears in Utopia level 5-11.


The Flock were convinced they had seen the last of Space King Pig and his cosmic cronies, but Super Red wasn't so sure. Using his mask's hyper-zoom vision he scanned the sector. He was right. The Piggies had retreated to a distant galaxy, a strange realm where the planets seemed to be made of grub. Worst of all, Big Bork was about to tuck into an eggsteroid!

Luckily reinforcements had arrived from Piggy Island. Feeling left out, Bubbles had made his way through the wormhole. Had the piggies finally bitten off more than they could chew?

Birds defeat the Fat Pig who then becomes small and the Ice Bird retrieves the Eggsteroid. The Fat Pig sweats as the Birds glare at him. 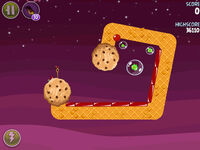 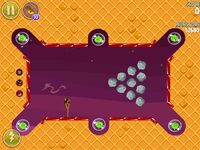 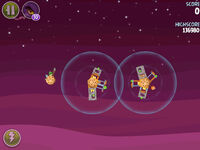 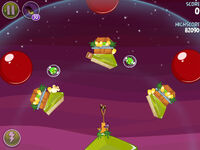 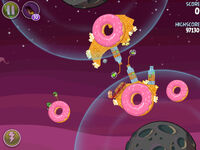 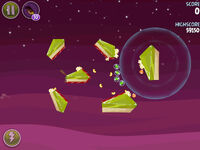 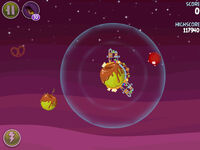 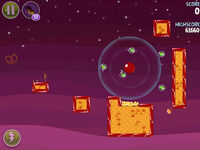 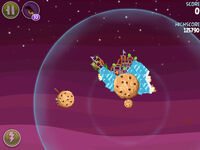 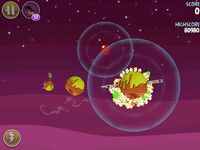 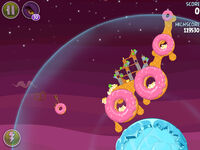 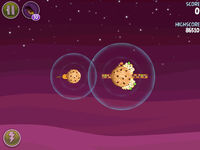 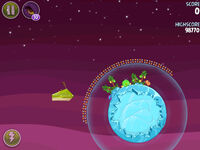 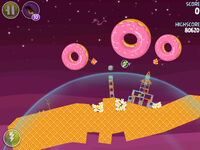 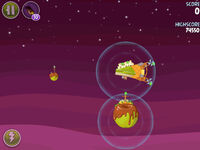 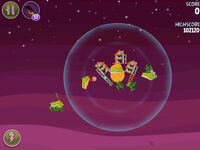 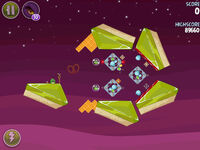 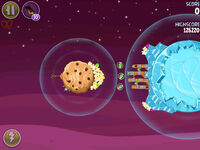 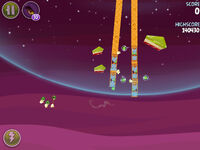 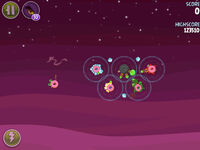 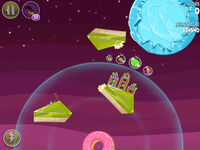 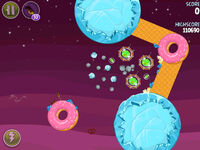 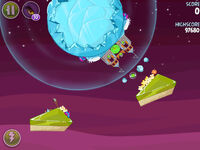 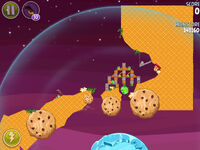 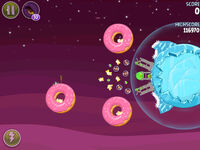 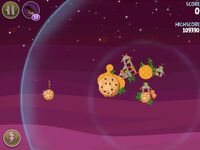 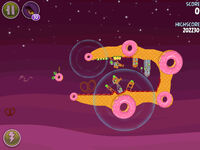 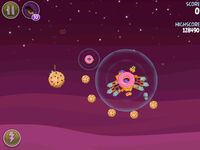 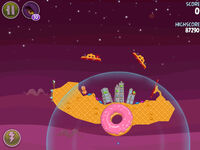 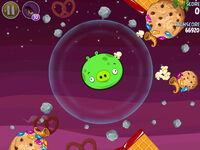 Level 4-30
Add a photo to this gallery

Retrieved from "https://angrybirds.fandom.com/wiki/Utopia?oldid=261521"
Community content is available under CC-BY-SA unless otherwise noted.